Get instant feedback by rating the seven elements that make teams high performing, thinking about the normal work team you interact with most often

As an executive coach, a standard practice in assessing a fit between the coach and coachee is what is commonly called a ‘chemistry check’. As the name indicates, it allows a coach and coaching client to work out if there is a fit regarding trust, rapport and coaching expertise and experience.

Just as the coachee should be sizing up the coach, a good coach should be following a similar process – that is, making an authentic and congruent decision regarding ‘fit’. Even though the client is the customer and purchaser of a service (coaching), a coach will also be assessing whether they are the right coach for the prospective client. Where a fit isn’t obvious, a coach acting with integrity will be prepared to forfeit the coaching fee to make the right decision and introduce another coach.

I have been using an informal scale for some time now to help assess fit. I have mentioned my use of the scale to colleagues and clients, and several have said, “Love it. You should write about it.”

So here it is.

In our coaching practice, we use an informal (and might I say – highly subjective) tool to help assess fit. Rather than being an evidence-based tool, it provides a frame of reference for us to think about where we believe the coachee is ‘at’ regarding their changeability. While it’s not the job of a coach to change people, it is our job to help enable the client to change in the areas that matter most to them. These areas often cross into their personal life as well as their professional life. It is also the job of a coach to expand people’s awareness of how they see themselves in relationship to the world (colleagues, customers, family, etc.) which then often re-focuses them on the needed areas.

What is the CI?

The CI is essentially a continuum from 0 to 10 (see below) to help assess where an individual might be in relation to their openness to change and therefore what approach might work best. 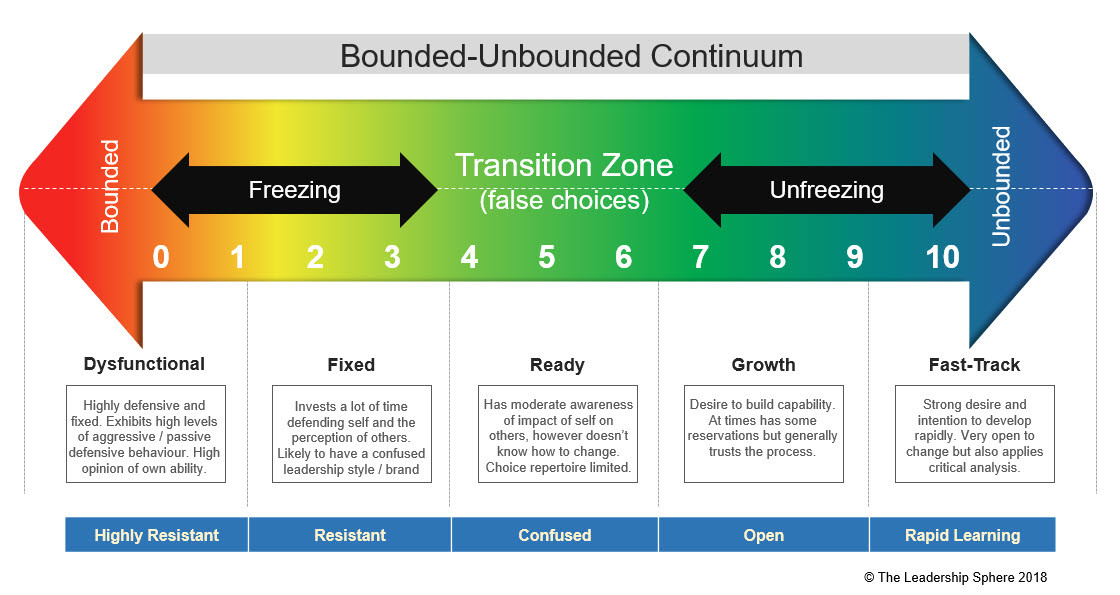 Dysfunctional (< 2): Starting on the left-hand side, a score of zero (0) indicates the individual is in a highly bounded or restricted state. They are ‘frozen in time’ in terms of the way they see themselves and how they interact with the world around them. This ‘bounded’ reality manifests itself as dysfunctional behaviour in either a passive or aggressive way. In simplistic terms, the individual has created a range of responses they think are necessary to get by and keep them safe. At senior levels, this usually manifests itself in aggressive-defensive behaviours such as a command and control management style or micromanagement. Their choice repertoire is limited, and therefore they tend to deploy the same approach style, regardless of the scenario. People in this zone can be plain ‘hard work’ for a coach. This is where the client contact (e.g. HR Director) might say ‘good luck’ with a pained smile on their face after providing a briefing about the individual.

This is where the client contact (e.g. HR Director) might say ‘good luck’ with a pained smile on their face after providing a briefing about the individual.

Fixed (2-4): While individuals in this zone exhibit similar behavioural tendencies as those in the ‘Dysfunctional’ zone, they are not as extreme. However, they do burn a lot of their time and ‘headspace’ defending their sense of self (ego) by guarding the perception of their competence and self-worth like a watch-dog. They have developed some unhelpful strategies to maintain their reputation. What people in the Fixed zone don’t realise of course, is that most people see straight through it. They are often seen as dogmatic, combative, difficult to influence and hard to work with.

Transition (4-6): In the Transition zone, people are more ready for change. While they have moderate levels of self-awareness, they are still somewhat stuck. This is where we see ‘false choices’, meaning that while the person appears to have a broad range of responses, they are still somewhat bounded by a narrow runway of possibilities. This is because they still see the world as a place where they need to defend themselves against various threats such as their sense of identity, status, or competence. People in this zone have the potential to make transformational changes through increased awareness and building skills in those areas. For example, I coached one such individual several years ago who was touted as CEO material. However, his leadership style was creating significant challenges, including a poor performing business. He had a ‘breakthrough’ moment through the coaching process and changed his approach almost overnight. He and his business unit thrived.

Growth (7-9): Those in the Growth zone have a mindset of learning, experimentation, and growth. They are motivated to improve themselves in a broad range of areas. While they sometimes second-guess themselves or the process, they usually get on board quickly and are willing to learn. They are ‘unfreezing’ or becoming less rigid about their beliefs, realising that sometimes multiple truths can exist concurrently. Their mindset is more ‘and’ than ‘either-or’. They are more able to deal with complexity and ambiguity.

Fast-Track (10): A ‘10′ indicates an individual who is completely open to possibility. They are curious, embrace learning, and are generally savvy about what they will take on and what might not be right for them. They are in a position where they tend to focus on other people’s development as much (if not more) than their own. They are givers, not takers. They have the potential to fast-track their progress – and almost without exception – do just that. They are generally already very successful and see becoming a better leader and colleague as a lifelong journey. They also know that leadership is an ‘inside-out’ job, meaning that our interior reality (mindset) drives our exterior reality (behaviours and impact).

A big part of why the CI was born came came from my ‘live’ experience of prospective coachees during the chemistry check meeting. Perhaps predictably, I met a full range of people from those who were wholly frozen or bounded, through to those who were completely open and ready to go. I sometimes fumbled to find the right language that would provide the coachee an understanding of my experience of them in that moment.

One time I was meeting with an executive who was experienced and reasonably successful, yet there was an arrogance that I knew would hold him back from getting the full value from coaching. So without giving it much thought at all, I said, “I wanted to mention that I use what I call a Coachability Index, where I rate people from 0 to 10 based on how ‘coachable’ I think they are.” After a long pause, he said, “I’m guessing you wouldn’t give me a 10.” Curious, I asked him why he thought that. He then proceeded to tell me that he knew he could come across as aloof and closed off. Bingo! Then the real coaching conversation began. He had moved beyond the push and pull of trying to prove to me how good he was and instead became more real, more vulnerable. He then shared that his relationships were suffering as a result of his approach – including in his personal life. It was a breakthrough moment.

I was sold on the idea and potential power of the Coachability Index.

You might think that I would say a ‘0′ because of the challenge. Or perhaps because you think they need coaching more than people further ‘up the scale’. Or perhaps you are thinking that the benefits of shifting a ‘0′ to a ‘5′ or higher would have a positive ripple effect on those in that person’s life. All of these thought bubbles might be true.

However, coaching a ‘0′ is not my first choice. In two decades of coaching people across multiple industries and sectors, I have coached maybe five people who I would assess as a true zero. There’s no getting around it – they are hard work. Really hard. Despite irrefutable evidence that their approach and style are destructive, they defend their reality like their life depended on it. And maybe that’s the problem. They are so invested in managing the world’s perception of them or are so stuck that they can’t even see a need to change. In their minds, any promised future rewards don’t justify the pain and effort they would have to endure today.

In their minds, any promised future rewards don’t justify the pain and effort they would have to endure today.

A Message for Any ‘Zeros’ Reading This

I have an enormous amount of empathy for all the zeros out there – let’s face it, it’s not a great place to be living. However, I respectfully invite a future conversation with you when the self-induced speed humps become intolerable. When in your heart you know that there must be a different, more fulfilling way to lead, love, and live. I promise that the rewards are extraordinary. And I think you deserve it and those who are in your life deserve a better version of you.

In the meantime, whether you are a coach, manger or member of a team, the CI can be a useful tool to use – even if you don’t actually share the score with the other person. However, it is the conversation that provides the richness and power. Finally, the best place to start is with ourselves and own assessment of where we think we are. And a cheeky little tip if I may, if you rate yourself a ’10’, then you almost certainly are not. Good luck.

Let us help you find what you’re looking for! 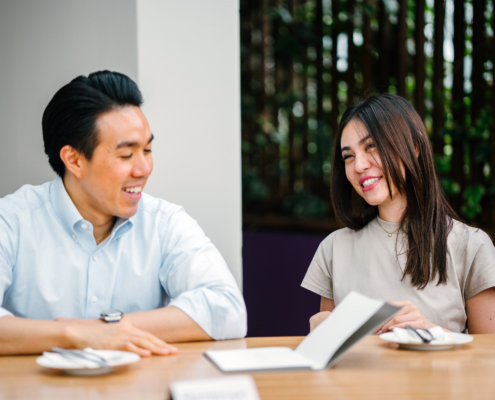